Maxime Vivas is a French writer and journalist. Based on his two visits to Northwest China's Xinjiang Uygur Autonomous Region in 2016 and 2018, he wrote a book titled Ouïghours, pour en finir avec les fake news (Uygurs, to put an end to the fake news), in which he described his observations regarding Xinjiang's anti-terrorism efforts and the region's development, and analyzed the relations that the US National Endowment for Democracy has with the separatist World Uyghur Congress (WUC) and some nongovernmental organizations like Human Rights Watch (HRW). He shone light on how these organizations colluded in concocting and spreading "genocide" accusations against China's Xinjiang. The book was published late last year in French.

Global Times (GT) reporters Liu Xin, Fan Lingzhi and Chen Qingqing interviewed the French writer to understand why he spent four years writing this book and his visits to Xinjiang. 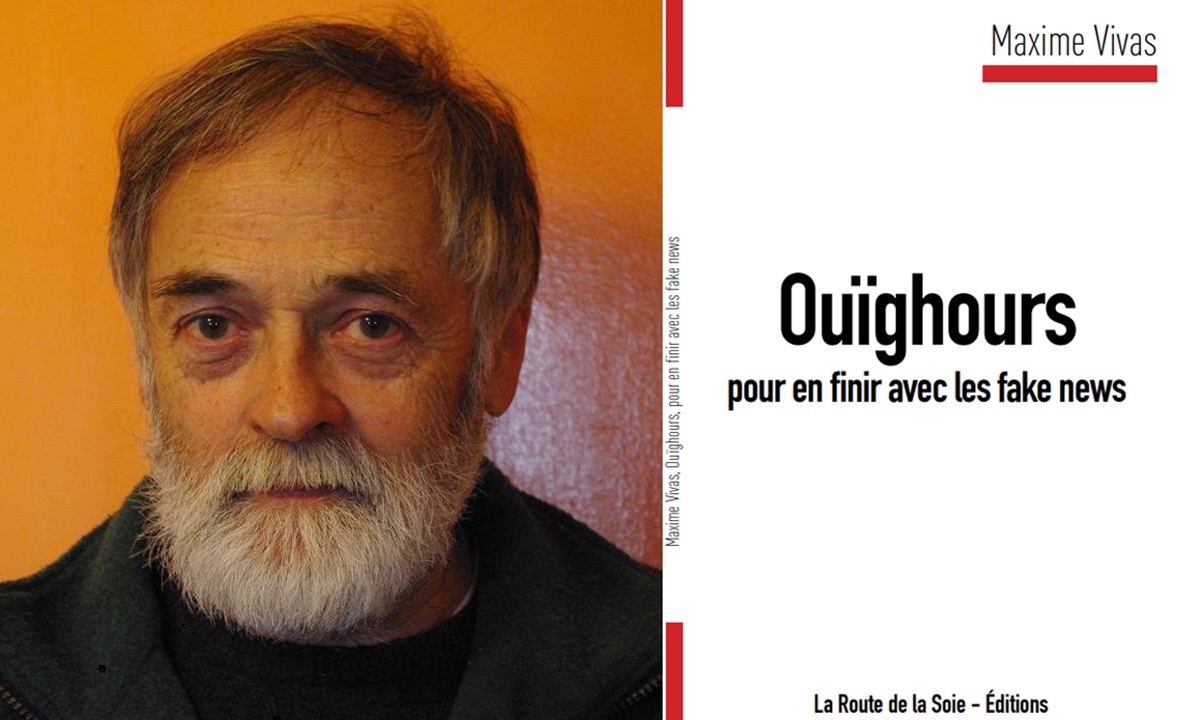 GT: Could you introduce your new book? Aside from the French version, will the book be published in English, Chinese or Uygur? Vivas: This book was born out of an observation of disinformation used by many French media outlets when reporting about China's Xinjiang. In this book, I want to demonstrate that the Uygur "genocide" claim is a lie. I revealed the individuals who are the enthusiasts of the lies and their links with the CIA.  I give examples of a large variety of fake news, lies, doctored photos and false testimonies. I don't give untenable conclusions, and I can prove that these are fake. For example, when Raphaël Glucksmann, a member of the European parliament made the assertion that "any Uygur who wears a beard has been sent to a 'concentration camp' in Xinjiang," I presented photos I took in Xinjiang to refute his lies. In France, among the elected officials, writers or journalists who speak about Xinjiang, none of them has gone there. I say what I saw. Maybe I haven't seen the whole picture about Xinjiang, but I am not making it up. I am not hiding anything that I have seen.  Our journalists don't know what they are talking about when they talk about China's Xinjiang. Like parrots, they only repeat lies made by Adrian Zenz, an evangelist "guided" by his faith - he once said that God ordered him to fight against China. He is also an active figure in a far-right anti-Communist organization.  Zenz is hailed an "expert" on Xinjiang, but he actually created tons of lies that need months to debunk. He has no morals. For an honest man, it is humiliating to argue with such despicable person. The campaign against China's Xinjiang region is global. In my book, I unveiled precisely where and when it started, and for whose interests. I hope my book would be published in many countries, like my book on the Dalai Lama, which was published in the US. My new book has been translated into Putonghua and I have been contacted by publishers in China. I hope it will be published in Putonghua, Uygur, Arabic, English and so on. GT: When did you get the idea of writing a book like this? What prompted you to complete it in four years? Vivas: Since 2016, I had written numerous articles which circulated on the internet on what I had seen in Xinjiang. In 2018, when I went to visit the region again, I witnessed the enormous progress that had been made within two years.  But I also noticed the outburst of reports on Xinjiang made by French media and how they could lie with impunity, without ever having their claims debunked.  In debates on the radio or on TV, the guests who spoke about Xinjiang were all "journalists, political scientists, experts, sinologists, high-school teachers, and so on who had something in common - they had all read Adrian Zenz' lies but none of them had been to Xinjiang. The absence of the slightest challenge to their words gave them a veneer of truth. It seems that in the radio or TV studios, they were stronger than the whole of China. A proverb says that "Every dog is a lion in his own house." At first, I was very hesitant to write this book. I have already written an investigative book on an anti-China "NGO" - Reporters Without Borders. This has seen four threats of trials against me. I also wrote an investigative book on the Dalai Lama. In both cases, I wrote against public opinion and the media, but I'm proud for what I did. I was hesitant about the Uygur book, because I knew I was going to be pretty much alone in France, in Europe, in telling the truth about this region of China in a book.  In my city (Toulouse) there is a bookstore which is one of the four largest ones in France. The China section is quite small, and all of the books there are anti-China books. Mine has been there ever since I asked the manager to buy it. Toulouse, please allow me to remind you, manufactures planes for Airbus, and China is a client country. A whole part of the city depends on aeronautics. In short, we could have hoped for a little empathy.  So, for this book on Uygurs, I play the role as a "suicide bomber." I told myself that I was going to spend a lot of time writing it, especially because I didn't have the right to make the slightest mistake which would serve as a pretext for others to do a "Vivas-bashing."   As the mood in the media was "China-bashing," I was unlikely to find a publisher for such a book afterwards. And this fear was premonitory. I got no response from many publishers. Fortunately, a French intellectual, Sonia Bressler, a professor of philosophy and epistemology who knew Xinjiang, appeared. She was appalled when she saw how Xinjiang was talked about in France. She therefore established a publishing house: La route de la Soie. She did this so that there was a space of truth about China. When I offered her my manuscript, she accepted it before even reading it. For more than two months, we worked together to proofread and correct the manuscript in its smallest details.

Maxime Vivas and his working partner poses with a local resident during a visit in Xinjiang. Photo: Courtesy of Maxime Vivas

GT: Could you share your stories of visiting Xinjiang? How long were you there? Where did you go? Had you been invited by the local government or made the decision yourself for the trips? Vivas: I stayed in Xinjiang for two weeks each time. The first time, in 2016, I was contacted by the Chinese Embassy in France. I was there with 40 journalists from 20 countries. The second time was in 2018. At the invitation of the Xinjiang Production and Construction Corps, I went to Xinjiang with my partner. On both trips, we traveled across Xinjiang by bus and plane. We visited big cities like Urumqi, Shihezi, Kashi, and we also went to villages. During the two trips I saw farms, lots of factories and schools. I also saw mosques, theaters, museums, cultural and artistic centers. I attended grandiose shows, including one in the new theater about 50 kilometers from Urumqi, a magnificent construction of Arab-Andalusian inspiration.  I have observed incredible dynamism in the Xinjiang region. I have also seen a certain delay in its development. I have seen citizens who do not know the language of their country (Putonghua) - I sometimes needed two interpreters when talking to them.  And I have also seen, like I wrote in my book, how the Chinese government is preventing more deadly terrorist attacks with strict measures. Unlike our media, I am not hiding what I have seen, neither did I make things up. My partner and I wrote a book about this trip, about what we saw and felt. We hope it could be published because, in an aspect of a tourist travel story, it shows the extraordinary dynamism of this region. We did not visit any training center. The Western media hyped "concentration camps, extermination camps" and "genocide." We know that China is setting up vocational education and training centers. All countries of the world have places for common criminals and also for citizens who have been engaged in terrorist activities or who threaten to do so. I tell in my book how ferociously France once fought terrorism and separatism, and how harshly it fights today against political Islamists. I also tell, without hiding anything from what I know, the methods used in China to fight against "the three evil forces."

GT: Some Western media are also talking about "forced labor" in Xinjiang. Have you seen forced labor in Xinjiang? What are the reasons the West makes up "forced labor" lies there? Vivas: Forced labor? Our media have gone too far. They said that in Xinjiang, there are "500,000 Uygur slaves in the cotton fields." Unfortunately, they could never show us satellite photos by which we would see these "unfortunate" people, probably guarded by hundreds of thousands of armed police! In France, in my region, when the time for the harvest arrives, our wine growers call on grape pickers from Spain, Morocco, etc. They are not called "slaves," but "seasonal workers." I explained these at length and precisely in my book: the "NGOs" like HRW and the WUC are funded by the US, through the CIA. I am not telling you what I believe, but what I know. Of course, they are in contact. It's the National Endowment for Democracy that gives them the dollars. GT: In your opinion, do Western politicians, media and people have a clear understanding of Xinjiang? Why? How many people around you went to Xinjiang? Why are they drawing conclusions about a place they had never been to? Why does the West continue to criticize Xinjiang when the security situation in the region is at the best in recent years? Vivas: I know a lot of people who talk about Xinjiang, but I only know three who have been there: Sonia Bressler (my editor), my working partner and me. Everyone else who speaks or writes about Xinjiang is just repeating what people like Adrian Zenz and CIA-paid "NGOs" said. The French media are self-intoxicating and politicians get information from these media. Not all: Jean-Luc Mélenchon, candidate for the 2022 presidential elections, refuses to bark with the pack. Twice he has let me know he is supportive of me.

GT: Did you receive threats for writing the book? Vivas: For this book, I received insults and slander. No more, it's too early. I know how it's going to turn out: the anti-Chinese clique, unable to find a lie in my book, will engage in ad hominem attacks and create a diversion by criticizing Beijing on every possible subject. GT: Someone may question why you wrote the book and whether you were funded by the Chinese government. What's your response to this? Vivas: These criticisms have been made. They used to say that I was paid by Radio La Havana (Cuba). For my book on the Dalai Lama, they said, I wrote "at the dictation of Beijing." You know liars mess up everything. The word "ethics" is unknown to them. I have a family and I would rather die than shame them with lies. For my book on the Uygurs, I would find it normal that I get copyright for its sales in France and abroad. The readers will pay, not the Chinese government. Those who make it up offend me. China is a great economic and military power. But for propaganda, the US is the world champion. Thanks to the US, the French know the names of the 50 states of the USA and only four Chinese regions - Taiwan, Hong Kong, Tibet and Xinjiang. The French feel sorry for the people of Xinjiang in their imagination, but they never realize that the US and its allies are actually worried about the Belt and Road Initiative (BRI) project that starts in China's Xinjiang.